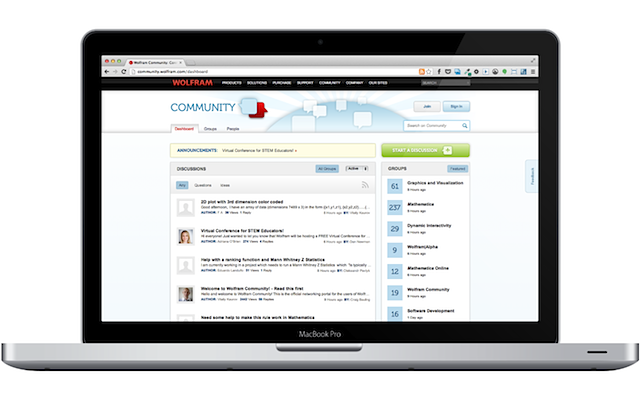 One of the most important projects that I worked on over the past several years has been the planning, design, and implementation of Wolfram Community. Discussion of how to evolve Wolfram’s variety of social platforms had been ongoing even prior to my entry to the company, but the solutions that had emerged previously were stopgap implementations to address passing needs. My aim was to take a holistic look at our user community’s needs, and design a flexible, extensible platform that could meet those needs for years to come.

One of the first things I did was to pull together a lean analysis of what other companies and organizations do for their user communities. This helped us understand the core requirements that any system we designed would be measured against.

Next, I conducted a series of stakeholder interviews, resulting in a laundry list of desired features and components. I used the understanding from that process to conduct an extended workshop with representatives from all interested departments for the purpose of creating ad-hoc personas. These simple, thumbnail understandings of whom we were trying to serve strongly influenced the remainder of the design process. Out of all this material, I began to explore a variety of design directions in quick, simple wireframes. One such early deliverable already shows the rough contours of how the site would ultimately develop. As the project moved along, it became ever more critical to ensure that all stakeholders and executives has a shared understanding of the project’s aims and measures. To that end, I wrote an executive summary of the project which became the bar against which we were (and continue to be) measured.

This project aims to implement a new Community platform for customers and users of Wolfram products.

This includes building a modern discussion system (which ultimately will replace MathGroup, the Student Support Forum, and the Faculty Program Forum), creating a file exchange system (comparable to what is offered by MathWorks; ultimately replacing library.wolfram.com), and supporting intra-user discussions through the creation of a profile/directory system.

At a technology level, this will include a unified system incorporating Wolfram ID accounts, a reputation/badging system for trusted users, a voting mechanism to promote high-quality content, and integration with the (forthcoming) Wolfram File Cloud.

In future phases, we may wish to incorporate a job board, user blogs, contests, or wikis, which is why Liferay has been identified as the targeted platform.

Through hundreds of discussions, meetings, and iterations, Nishant Satanekar (one of my UX Designers) and I worked together to flesh out a fully clickable prototype depicting all major page types and interactions. This lean deliverable was tested though a series of task-based usability tests, and became the specification from which our graphic designer and developer began building the site. The site entered a closed beta period in late 2012, with some of the most engaged users and Wolfram developers putting the site through its paces. Ultimately, Wolfram Community was made available to the world in July 2013. In just a few short months, the site had already amassed thousands of posts and users.

Of course, this is only the beginning. In addition to ongoing bug fixes and feature enhancements, the graphic design and development teams already hard at work to enable responsiveness on the site (though it was originally part of the plan for launch, Liferay proved to be a challenging application for which to build flexible page templates). Additional features on the roadmap include full integration with Mathematica Online, a robust marketplace for resources and templates, and much more.